One of the five municipal partnership projects running under TUSELOG Programme, “Turkish-Swedish Equality Network”, focuses on improving gender sensitivity in local authorities and establishing and strengthening gender units in partner municipalities. Project encouraged all four partners to commit to the European Charter for Equality of Women and Men in Local Life. Municipalities signed the Charter in 2014 and they are now on their way to prepare equality action plans. Kalmar, Ordu, Giresun and Osmangazi municipalities used their last project meeting – held in Stockholm on 27-30 April – as an opportunity to organize a training programme on domestic violence. Representatives from Union of Municipalities of Turkey and SALAR also attended this much-anticipated programme, which was delivered by experts Synne Ostermann and Morten Nystrøm from Alternative to Violence (ATV). ATV is a professional research and treatment centre in Norway for violent offenders and people witnessing or being exposed to violence. ATV started in 1987, as the first treatment centre for male batterers in Europe.

“In Turkey, we only work with violence victims and witnesses. However after this training, I realized that in order to find fundamental solutions, we also need to focus on people who use domestic violence,” said one of the participants.

Turkish delegation also had the chance to visit European Parliament representation office in Stockholm, the Centre for Domestic Violence in Solna and the National Centre for Knowledge on Men’s Violence Against Women in Uppsala. “It was very interesting to see the statistical data on relation between violence and resultant health problems that occur in upcoming years, even if the violence ended.” 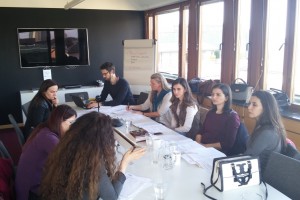 When asked the most striking point of the programme, “I was deeply affected by Christoffer’s story,” said most of the participants about an 8 year-old Norwegian boy who was beaten to death by his step-father. “It was incredibly sad; despite the fact that his teachers suspected something about him was not quite right, still no one did anything to save him. This tells me that every one of us has responsibility to take action to prevent domestic violence.”